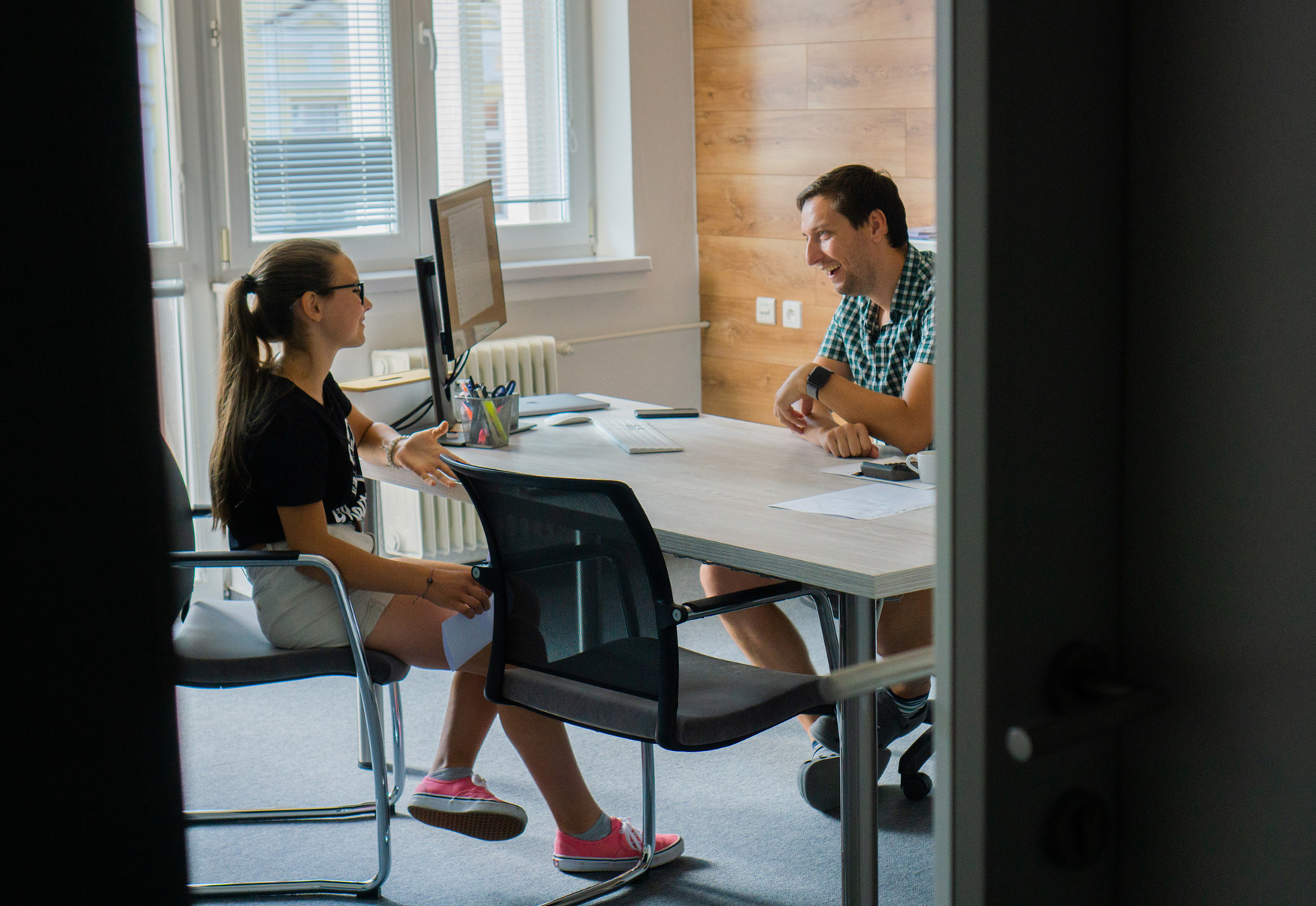 Holidays in GoodRequest: How was the 12-year-old "intern" in GR?

Hi, I'm Lujza and I'm 12 years old. I'm attending the 7th grade and I really enjoy taking photos. During the holidays, I spent one week in Žilina, when I came to GoodRequest company to have a talk on Friday. I didn´t know that time that I would be here for the next week.

CEO Tomáš came to the office where I was sitting. I had no idea that he was the "boss" because he was friendly, young and overall I did not imagine the "boss" of the company someone like him. :-D He was interested in who I am, what I am and what I enjoy. As we talked more, I said I liked taking photographs. He suggested to prepare a photo report with my eyes . How I see the company, the people and also what is actually going on here.

I was surprised, I was scared too. :-D But I was looking forward because I haven´t done anything like that yet. So all the photos in this article (except the ones  where I'm :-)), I took. :-)

Katka, who is responsible for the people here, then took me through the whole company and told everyone who I was and that I would run here with a camera. In every office, they were nice to me, fine, and didn't treat me like a child.

In the morning I walked around the whole company, prepared breakfast in the kitchen and then started "to work."

In addition to running with the camera, I also joined the meetings - one where they solve the capacities of people for the next week and one where it is planned what will be done within the company all the week.

Monday is full of meetings and it's quite a rush. Even so, Tomáš found time for me to talk. I asked him to explain what he did and what the whole company actually did. What was their job. So that I can explain it to my peers - classmates and friends.

I wanted to know how Tomáš had got an idea of starting a company. He replied that only a few times in a person's life would man be enlighten by getting such an idea.

And no kidding - they had worked with friends on an ecological project and obviously, together with the boys they had decided to continue after the project in their own company. Because at that time there were relatively few companies like them and it was a good opportunity.

Next, I also asked about customers and projects. Tomáš said that the biggest are currently Bistro.sk, NAY elektrodom, Tatra banka, Innovatrics (which are among the top in the world in projects where face recognition is needed, etc.) and Tipsport. I knew most of them, I just didn't know they originated here. And what I didn't know - I found out in an interview.

He also explained to me in brief what system GoodRequest works on. The projects that are created here belong to the company that orders them and then they send them further to the people who use them.

I was wondering how many people were in GoodRequest at the beginning, as now there are about 45. There were 5 of them and they have all been here so far. And they have been working for 5 years.

There are many people. At least that's how it seemed to me. That's why I wanted to know if so many people can get on well. Tomas laughed and said he hoped so. :-D

Working with people is difficult because everyone is different. But as it's all about people here, it is necessary to work in such a way that those people feel good here.

It doesn't matter that everyone here has a slightly different nature. The main thing is that everyone wants to learn, improve and have such a belief in him about what he is doing. That they all have a common goal and follow it together. Not everyone for himself.

Everyone from GR works in teams. There are 4 largest teams - iOS (iPhone apps), Android (apps for almost all other phones), Backend (websites and web apps) and Design (what it will look like). Then there are testers and people in management responsible for projects, people, marketing and office managment.

‍I was interested in the process of the project. Tomas explained it to me with Tipsport app. The client comes and tells his ideas about why the app will help people who like hockey. After the idea, an analysis will be made to figure out what the project will look like. According to the analysis, it is divided into small parts and tasks and they are divided between who is to do them - programmers or designers and so on. One task is, for example, a screen or a button. In fact, there are a lot of small things. And each one needs to be considered in advance so that they work together and work with each other in the app, on the web and with what is "behind it".‍

In order to know in advance how it will work, they prepare a scenario - what the person who will use it can do and how it will behave, and they have to anticipate it and create the whole app or website accordingly.

But before the app or web starts to be being programmed, it needs to be drawn. So that it fits with some of the rules that both Android and iOS have. And then it is tested with users. To prepare a tip- top for the design. Because design changes are fine, but they are already expensive and difficult when programming.‍

I wanted to know how to summarize what GoodRequest does. As he sees it. If someone in my class asked him: "What do you actually do at work, Tomáš?".‍

He said that the top role of GoodRequest is to help ordinary users simplify or improve their lives with technology. Because they are all around us, everyone uses them, there are many of them and they are constantly changing.

So fast that when Tomas was at my age, computers almost weren't at all. But when I'm at Tomáš's age, maybe my fridge will order milk itself when I finish it.

They therefore need to folllow and improve technology. Let it help people, not just do something to make it happen. For example, such Bistro - people can order food quickly with the application and do not have to call anywhere, check a lot of menus and so on. Or Fingera project, where the attendance system is based on fingerprints, not cards that employees can lose.

And one day it doesn't have to be food or a card for work, but for example a doctor who I won't have to visit when I'm sick, but I'll arrange it from home. That sounds interesting, doesn't it? :-)

Finally, I would like to share some interesting photos and gadgets that they have in GoodRequest. And I liked them.

If someone is tired, they need to switch off, change the environment and focus on something else than work, they can choose how to relax.

There is table football, lego, puzzles, couches in one room and tuli bags.

‍Lego kits are really great. They have many steps and it takes quite a long time to build them. Many people take part in them. And when they're done, they go to the meeting room.

And having Star Wars lego in the meeting room where all the meetings are is really cool. :-)

In addition, there are other various things in the office that make your stay more pleasant. :-)

For example, popsicles, snack bar - sweet, salty, healthy, for drinking – many things. There is also a fruit bar. It's there nonstop. And once a month they have breakfast together and from time to time also a barbecue party or another common activity. I didn't catch that there, but I heard a lot about them. They're really great from talking.

And they also have fish and crabs.

I didn't really expect that in the office of the programmers. :-D

And finally, I also had the opportunity to help with something!

Together with Natálka (who is in charge of the office with Nika), we improved the kitchen with a great notice board. Thanks to 100 photos from 5 years, I learned a lot about the company and the people. They kept telling me where the photo originated and on what occasion it was. It's really one big family.

And thank you for taking me in for a week. :-) I hope to come back there again.

If you want to join GoodRequest family, check job vacancies. They are looking for someone great for  Android team and also for iOS team.